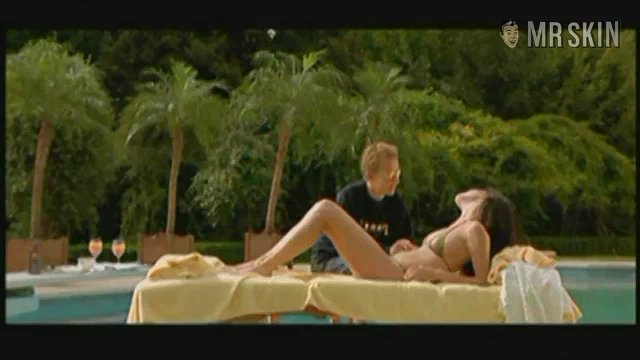 French TV actresses are very much like their American counterparts in that they tend to be drawn from a pool of insanely attractive young ladies whose highly desired and articulate faces play perfectly to the camera’s all-seeing eye. These beauties, like France’s brunette small-screen phenom Mareva Galanter, must be particularly suited to exuding sufficient sexual vigor to energize the full-screen close-up. Of course Mareva’s purely carnal face has the power to bewitch and arouse, like the faces of her American counterparts. Also like cathode starlets of the U.S., Mareva’s body, which is never fully utilized by the broadcast medium, is of a caliber that any porno starlet would kill for. See its long, lean, well-muscled, and breathtaking breastly perfection bikini-clad in 3 Zeros (2002). The difference between U.S. TV vixens and Mareva Galanter? We here Stateside are not given the opportunity to see anywhere near enough of Mareva.