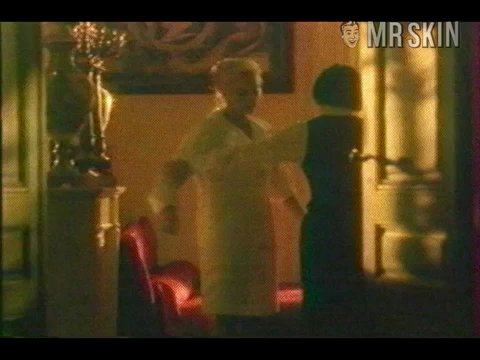 L' ange noir (1994)
Sexy, underwear, lesbian 00:02:00 Sylvie's maid dishes up some rough stuff, tossing her onto the bed, tearing off her bra and panties, and exposing her kajoobs. Good help really is hard to find these days, I tell ya . . .

A well-known judge asks his attorney friend Paul (Tchéky Karyo) to defend his beautiful wife Stephane (Sylvie Vartan), who is on trial for murder in L'Ange noir (1994). Claiming to be violently attacked, she blasted an infamous gangster who surprised her at her home late in the night. While conducting a thorough skinvestigation, Paul reveals Stephane’s sordid past sexploits involving prostitution, pornography, and lethal links to her recent victim. When his client with the face of an angel turns out to be the devil, he sacrifices his own soul for a taste of her curvy charms. This naughty French film noir will lead you to get out your own gun and start plugging away.