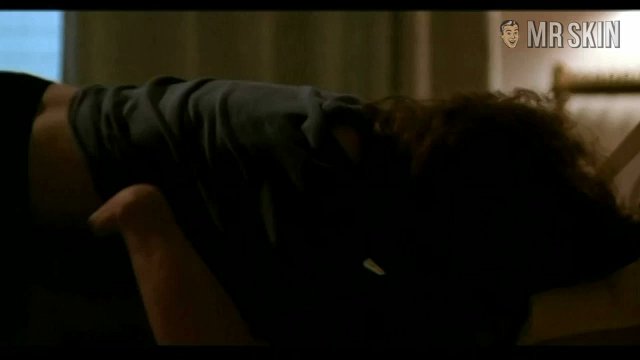 From a one shot on the TV drama thirtysomething to a slew of sexy appearances on the syndicated hit Silk Stalkings, Kate Hodge and her pendulous pair have given new meaning to the term boob tube. The sexy brunette launched into the horror genre on the big screen and became a reluctant scream queen after making her debut in Leatherface: Texas Chainsaw Massacre III (1990). She claims to hate scary movies but next found herself starring on the frightening TV series She-Wolf of London. With Rapid Fire (1992), she attempted to leave the blood and guts behind and expose her more sensual side. It was her first skin onscreen, and it's a walloping scene. The sight of her meaty chest is enough to bring out the monster in a viewer's pants. Continuing the carnal trend, Kate let her big girls out to play in Desire (1993) and forever abandoned her beastly career. Sadly, when not being scared stiff, she went a bit limp with short runs on failed sitcoms such as The George Wendt Show--which Wendt pretty quick indeed--The Louie Show, and Working. If Kate wants to repair the Hodge-podge of her career, Mr. Skin suggests she return to the gory origins of her professional life. There's always room for another bosomy beauty in the terror tales.

2 Pics & 1 Clip
Nude, breasts, body double 01:06:00 BODY DOUBLE?: Catch a quick slice of right hand mammage from Kate, getting it on skinterracially. Might be a double, though . . .

The Louie Show - as Gretchen Lafayette

She-Wolf of London - as Randi Wallace