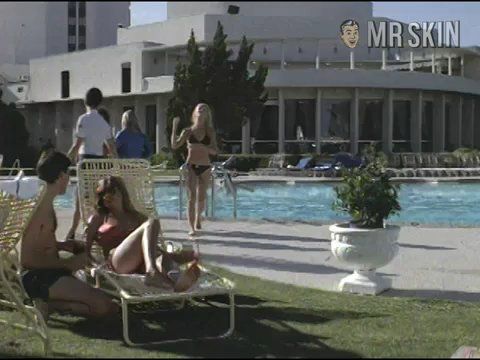 At fifteen, the beautiful, blonde Joan Van Ark was already making a name for herself in her hometown of Boulder, Colorado, by playing Anne Frank. She ended up enrolling as the second-youngest student in the Yale School of Drama. After college, Joan was discovered by director Mike Nichols, who had her audition for the Elizabeth Ashley role in the national company of Barefoot in the Park. In 1971, when she returned to Broadway as the sixteen-year-old virgin in The School for Wives, her "innocence and simplicity" got her a Tony nomination--and Hollywood's favor. She made the move to the West Coast, landing roles on some forgettable series and endless guest spots on everything from The Love Boat to Wonder Woman. It all came together with her portrayal of Valene Ewing, which launched over a decade of stardom, first on Dallas and then on its popular spinoff Knots Landing. A distinguished career, indeed, but missing one crucial element. Where's Joan's perfectly svelte, naked body? Sure, she supplied us with a terrific bikini scene in Red Flag: The Ultimate Game, but Joan is an avid runner who's always been in great shape and was recently a late-night TV infomercial hostess for the Slim Down Solution weight loss system. Still, Joan refuses to open the Ark and let her beaver and sweater birds free. That's a dog-gone shame.

Days of Our Lives - as Janie Whitney

Tarzan and the Super 7 - as Manta

Thundarr the Barbarian - as Additional Voices

We've Got Each Other - as Dee Dee Baldwin