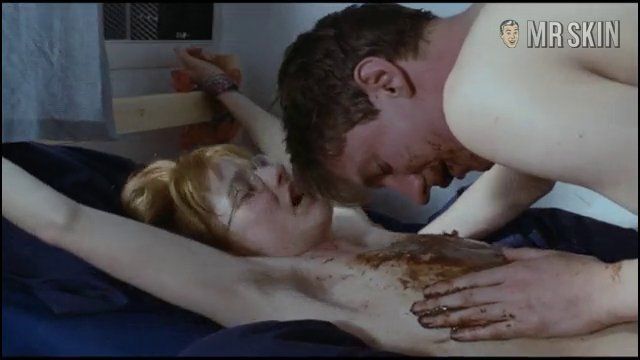 Jane Horrocks is British and quite prolific, having acted in over forty productions, all in her native land. She debuted in The Road (1987) before landing her most eye-catching role as the tiny-titted Bubbles on the hit TV comedy Absolutely Fabulous. She had small parts (in film and in her bra) in some Stateside cinema, such as a bit role in Memphis Belle (1990) and a voice-only role as Babs the chicken in Chicken Run (2000). Outside of Bubbles, Jane is most famous as the lead in Little Voice (1998), which was based on a play written especially for her and that booming sound that comes out of those wee lungs. Jane has appeared nude, as most pale, English actresses do, as a matter of principle. Her precious, teacup-sized breasts can be seen in two made-for-TV British movies, Alive and Kicking (1991), in which she plays a strung-out hooker, and Bad Girl (1992), which has a very dimly lit scene in which her breasts can be seen very briefly. And in Life Is Sweet (1991), those little girls are rubbed flat and hard. Life truly is sweet, at least for the actor who got paid to feel Jane up.

The Storyteller - as Anja

Watership Down - as Hannah