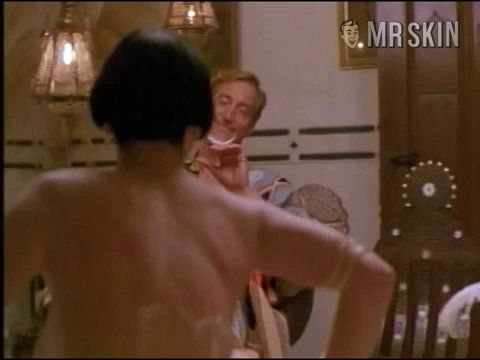 Jacqueline Pearce is best known as the nearly bald Servalan, Empress of the Federation, on the English cult sci-fi series Blake's 7. The character was originally written for a man, not unlike Ripley in Alien (1979) and Honor Blackman's Cathy Gale role on The Avengers. Lucky for Jacqueline's admirers, the change in sex occurred, and a hard-on fantasy of a queen bitch was born. Jacqueline's fetishistic costumes on the show garnished a special interest from fans. "I did get a letter from a man who asked whether I'd go around one night and chastise him, but would I not go before ten p.m., because his mother didn't go to bed until 9:30. But I went and she slept through it," she laughs, tongue in cheek. The success of the show sent her to L.A. to court film fame. "I went out to establish myself in a film career and I ended up working in a strip club called The Losers, the irony of which escaped me for many years." She began her movie career with Plague of the Zombies (1966). She finally shed those sexy outfits for her sexier body in White Mischief (1987), in which she was soaking wet, from her naked floppers to her meaty ass. While Jacqueline still works to this day, she's yet to repeat such a Pearce-ing performance.

Mondo Rosso - as Herself