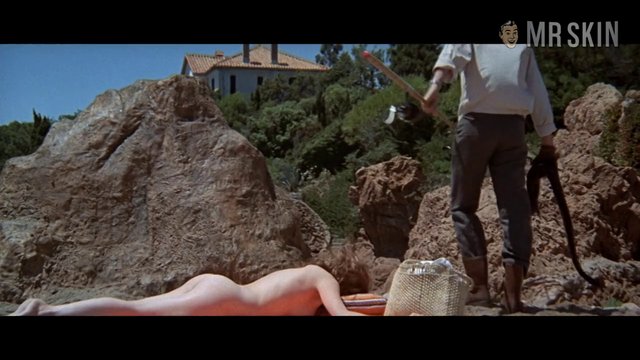 The Sicilian Clan (1969)
Nude, breasts, butt 01:06:09 Irina strips down on the beach to sunbathe, showing off her ass and later her breasts when she gets busy with her beau!

French actress Irina Demick had only had one very small part in a movie when she met famed producer and movie mogul Darryl Zanuck. The two began a relationship and he gave her a small part in his movie The Longest Day (1962). The movie would go on to be nominated for five Oscars and win two, but the notoriety of the movie also revealed that Zanuck was married at the time he was seeing Demick. She continued to appear in his movies, even with the controversy, then the two broke up. She continued to work regularly throughout the 1960’s and 1970’s then she left the business. Ms. Demick passed away in 2004. We get a good look at this French stunner’s booty and boobs when she strips down at the beach to do some nude sunbathing in The Sicilian Clan (1969). We first see her nice ass as she gets naked and lays face down on the rocks. When a fisherman comes over to her she rolls over to talk to him, showing us her flotation devices.

7 Pics & 1 Clip
Nude, breasts, butt 01:06:09 Irina strips down on the beach to sunbathe, showing off her ass and later her breasts when she gets busy with her beau!
Live Cams - View all