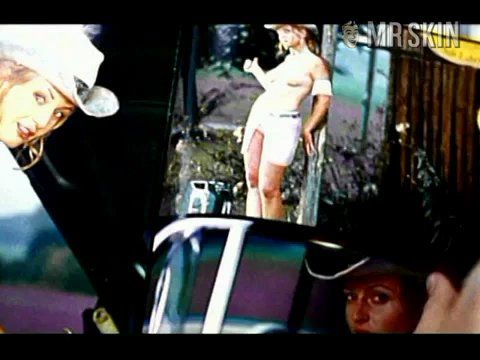 Crazy (2000)
Sexy Franziska Schlattner is skintastic in this sexy scene!

After attending the New School University in New York, taking private classes with Alec Rubin and participating in some of John Costopoulos’ workshops, Franziska Schlattner first appeared in the 1998 short Laura liebt das Geld. It was followed one year later by her small-screen debut in Der Voyeur and her big-screen debut in the highly acclaimed drama Crazy opposite such up and coming hotties as Julia Hummer, Mira Bartuschek, Karoline Herfurth and Oona-Devi Liebich. Other noteworthy credits since then include the skin favorite Mädchen, Mädchen, Peter Keglevic’s Tanz mit dem Teufel and more recently the leading role in Die Musterknaben III. Although Franziska was basically topless in Crazy where she played a Hustler model her only actual nude scene to date can be found in Der Voyeur. There the 5’8’’ tall actress has some nice boob-revealing fake sex with Götz Otto (Tomorrow Never Dies) that is similarly edited as the legendary scene from Nicolas Roeg’s Don’t Look Now but sadly comes (no pun intended) without its carpet-munching. Due to the fact that this made for German TV thriller also provides several minutes of additional skin by big-breasted Miriam Von Versen and the barely trimmed Claudia Mehnert it is nevertheless a definite must-see for anyone who enjoys beautiful naked women… so make one hand free and enjoy!