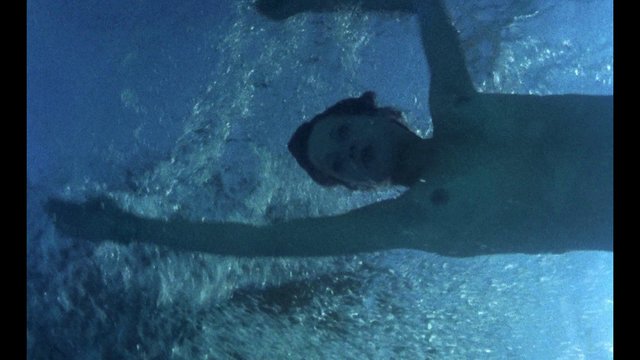 Emmanuelle (1974)
Nude, breasts, butt, bush 00:16:00 Christine watches Silvia dip skinny in the pool then jumps in to join her. See Boisson's poisson, as well as her boobs and buns. 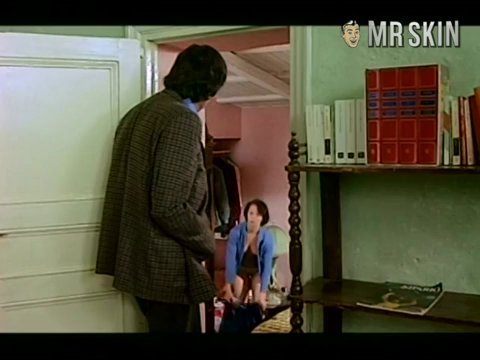 Identificazione di una donna (1982) Nude, breasts, butt, bush 01:30:00 Christine is number one making a number one on the terlit . . . nuuuude! Enjoy a nice long visit with all her bestest, breastest, nakedest parts when she gets up and gets dressed. 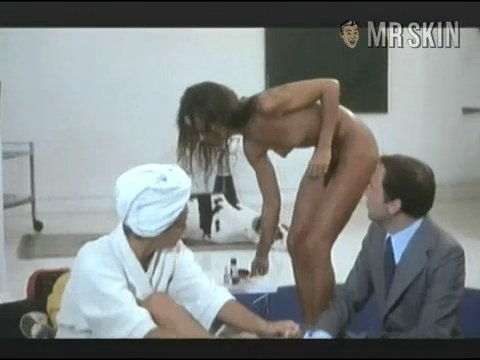 Love at the Top (1974) Nude, breasts, butt, bush 01:19:00 A young Christine walks down stairs, stark-naked, and greets Jean-Louis Trintignant and Florinda Bolkan with an eyeful of muff. Short but very sweet! 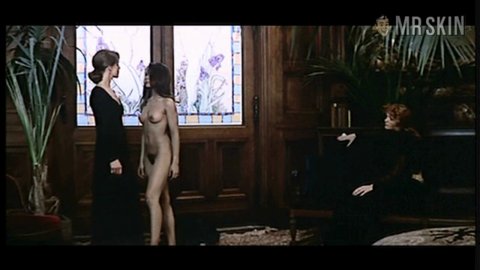 Christine Boisson likes to show off all her body, from her sharply upturned breasts to her dark, hairy bush. That's not stop-the-presses news when discussing a French actress. She also isn't too choosy about the roles she takes. Case in point: Born for Hell (1976), a Canadian/French picture about a homicidal nurse. Of course, she eventually found her niche and has since gone on to a stellar, skin-tastic career, with nude turns in quite a few films, including Le Mouton enrage (1974), Le Jeu avec le feu (1975), Rue Barbare (1984) and En Face (2000). And she's finally getting mainstream parts in Hollywood, like her sexy policewoman in The Truth About Charlie (2002). Like a fine French wine, Christine only gets tastier with age.

8 Pics & 5 Clips
Nude, breasts 00:49:00 Christine shows her bare, tanned titlets while laying on the pavement on the waterfront with some guy. Les anthills!
Nude, bush 00:51:00 Excellent, furry bush shot as Christine is sprawled in bed with a guy, legs akimbo. The camera pans in close as he starts to kiss it. (golf clap)
Nude, butt, bush 00:38:00 Niiiice hairy crotch shot as Boisson gets her 'poisson' up off the bed and opens her skirt to tease the guy laying there. She follows up by flashing him some very snappy ass.
Nude, breasts 00:56:00 Underlit tittage is seen as Ms Boisson straddles a guy in bed, then moves down for a little amour oral. Tres fantastique!
Nude, breasts 00:49:00 Hard-to-see flashes of crotch and tits during a red-lit sex scene, followed by left tit as she lays still afterward.

5 Pics & 6 Clips
Nude, breasts 00:52:00 She scoots around in a bubbly tub, and each of her tits escapes the confines of the water for some air.
Nude, breasts, butt, bush 01:05:00 See it all again as Chris and her boytoy bask in the afterglow . . . on a floor. Hey, it's good for the back.
Nude, breasts 00:03:00 Christine shows us a bean--her right one--when it spills forth from her nightie after being interrupted by a thief.
Nude, breasts 00:28:00 Christine peels down to enjoy a good old-fashioned deep-dickin', showing her spectacular rackular in the process.
Nude, breasts, butt, bush 00:56:00 Hey, baby, you a Pisces? She's underwater again, this time in a pool, and this time showing all three underwater B's before laying a big wet one on her swim buddy.
Nude, butt 01:29:00 Boisson flashes a farewell view of her oiled-up, tight-as-a-drum bunnage before covering it up with a robe, the tease.

7 Pics & 1 Clip
Nude, breasts, butt 00:30:00 We don't see Boisson's poisson, but she does show off her rack and rumpus room doffing her robe and joining her guy in the tub.

9 Pics & 1 Clip
Nude, breasts 00:44:00 Christine showers behind a glass door and we see glimpses of gazonga through clear slits in the glass, followed by a quick view of her right melon as she steps out and a flash of full-frontal when she puts on her robe.

7 Pics & 2 Clips
Nude, breasts 00:59:00 Her man makes a sneak attack on her prone bod, pulling her onto the floor for some frottage and allowing her beans to burst out of her robe.
Nude, breasts 00:51:00 Christine changes into a robe, showing off her incredibly toned hardbody. And speaking of "hard" . . .

7 Pics & 1 Clip
Nude, breasts, butt, bush 01:30:00 Christine is number one making a number one on the terlit . . . nuuuude! Enjoy a nice long visit with all her bestest, breastest, nakedest parts when she gets up and gets dressed.

1 Pic & 2 Clips
Nude, breasts, butt Christine walks around a slightly dark room and show off some butt and cute fun-sized funbaglets!
Nude, breasts, bush Christine gets out of the tub after her dude falls in, and she gives us some glorious, massively furry French full frontal!

6 Pics & 2 Clips
Nude, breasts, butt, bush 00:44:00 She pulls her dress over her head, gets stark raving nude, and lezzes up another broad, all three of her perfect B's visible. Brava!
Nude, breasts, bush 01:27:00 Christine's tied up and standing around with a bunch of dudes. And good news--she goes frontal again. I love a happy ending!

4 Pics & 1 Clip
Nude, breasts, butt, bush 00:16:00 Christine watches Silvia dip skinny in the pool then jumps in to join her. See Boisson's poisson, as well as her boobs and buns.