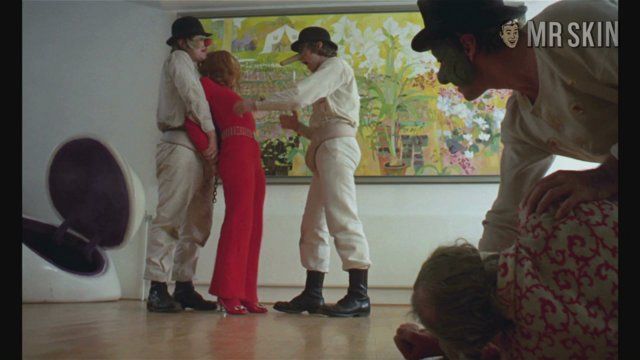 A Clockwork Orange (1971)
Nude, breasts, bush 00:12:10 Adrienne exposes her breasts, then full frontal during this scene, while Malcolm McDowell sings "Singing in the Rain". He's no Gene Kelly.

A Clockwork Orange (1971) is a futuristic depiction of a society just slightly remote from our own, and director Stanley Kubrick’s vision of moral decay extends from street thugs to government policy makers. The sex is plentiful enough to have earned the original release an X rating, and no affection is ever attached to any of it. As Alex, Malcolm McDowell’s threeway with a pair of teenyboppers is one of the most hyper-kinetic and humorous sex scenes ever committed to film. With outstanding flesh flashes from Carol Drinkwater as a naughty nurse, Katya Wyeth as a fantasy girl, and a whole host of other futuristic fillies, A Clockwork Orange will really peel your banana.

Nude - as Woman in film

Nude - as Girl in ascot fantasy