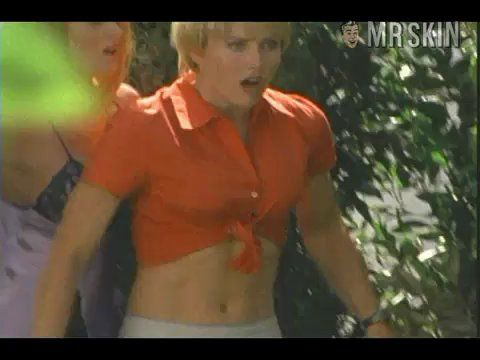 The dream of every busty young woman's life for a period of time was to appear on The Howard Stern Show and perhaps get to tantalize Howard Stern with her ta-tas! While Tracy Spindola may not have lived that dream, she certainly got as close to the dream as possible, appearing in the Stern produced short lived television series Son of the Beach. This Baywatch spoof saw its fair share of bosomy babes over the course of its three seasons, but Tracy Spindola somehow stands out! Appearing as Big Dipper on the first season episode "Eat My Muffin," Tracy was featured in a mud wrestling match that can be glimpsed briefly during the show. Though it goes by in the blink of an eye, Tracy's gigantic gobstoppers caught our eye as she lay in the mud, struggling to stand up! While we certainly wish we'd seen more of Tracy Spindola, we're certainly pleased with the mammaries she's left us with!