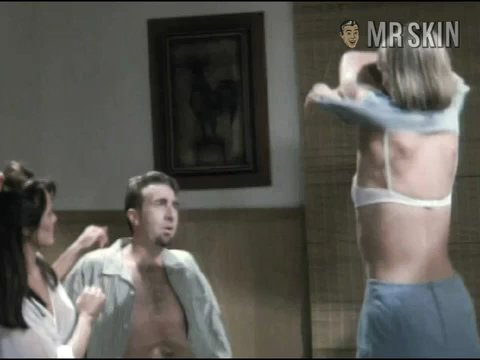 Scandalous Behavior (2000)
Nude, breasts 00:05:00 Bolton delivers the boobage in white panties as she and a comely friend seduce some lucky dude.

Big things come from Texas, like buxom Tiffany Bolton, a tall brunette with a chest as large as the vast prairie but far more hospitable. Tiffany is best known for her gig as co-host of the regular-people-versus-super-intelligent-trivia-whizzes game show Beat the Geeks, where her eye candy was a sweet distraction for the guests. She's obviously the hostess with the moistest, which is why she was cast on the Candid Camera rip-off Spy TV. But for those who'd like to really spy what Tiffany has to offer and beat off the geek in their pants, Mr. Skin recommends taking a look at her straight-to-video debut in the Shannon Tweed steamer Scandalous Behavior (2000), a.k.a. Singapore Sling. Her scene appears early in the film, when she shows off her big breasts with equally topless blonde Rena Riffel as they tease a bound and ga-ga guy in bed. Most recently, she's been seen in the short trailer spoof 12 Hot Women (2003), featuring no plot and 12 hot women. It's a role she was born to play.

4 Pics & 1 Clip
Nude, breasts 00:05:00 Bolton delivers the boobage in white panties as she and a comely friend seduce some lucky dude.

Beat the Geeks - as Co-Host