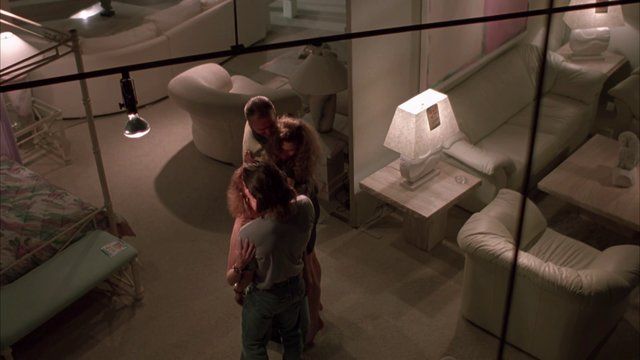 Stephanie Menuez starred in a bunch of noteworthy films between 1988 and 1996, before leaving the professions behind her. And that's a real shame because this busty redhead certainly had something to offer. Two things exactly, right on her chest! Some of Stephanie's more notable roles include the Michael Keaton drama Clean and Sober (1988), Gremlins 2: The News Batch (1990), and the sci-fi sequel Lawnmower Man 2: Beyond Cyberspace (1996). However it was her role alongside Mimi Rogers in director Ken Russell's apocalyptic film The Rapture (1991) that really grabbed Mr. Skin's attention! Check out Stephanie's cheeky chesticles as she sits on a guy's lap, and again later and she and Mimi participate in an orgy with a long-haired David Duchovny! Mulder certainly knows that the case is never closed on Stephanie Menuez's seX-Files!