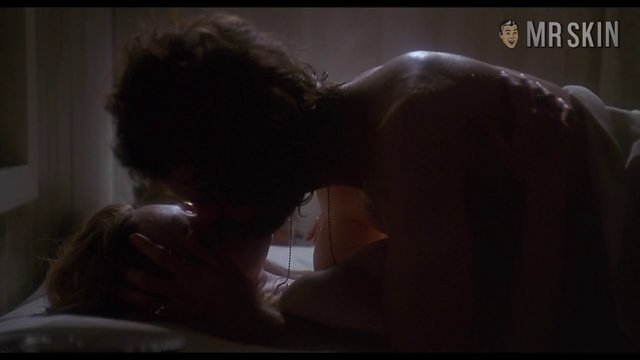 Rush (1991)
Nude, breasts 00:39:19 It's darker'n sin, but if you squint, you can make out Jennifer Jason's right raisin as she and Jason Patric get busy in the boudoir.

Rush (1991) is not the story about the development of that inhalant that was so popular in gay bars in the 1970s. That movie has still to be made. We wait patiently for it. Until then there is this, which tells the tale of two undercover narcs in a small Texas town, they’re played by Jason Patric and Jennifer Jason Leigh. They buy drugs in an attempt to ingratiate themselves within the underground and get in striking distance of the boss controlling the illegal trade. The problem is, to convince the dealers they’re legit, they often have to sample the product. Jennifer gets hooked, then clean, and then Patric is addicted. In the midst of this, they’re also fucking each other, as much as junkies can. That’s how come we get to see Jennifer’s tits and buns in a final sex scene, as Patric fucks her doggy-style in a last-ditch effort to keep her from using, drugs that is.