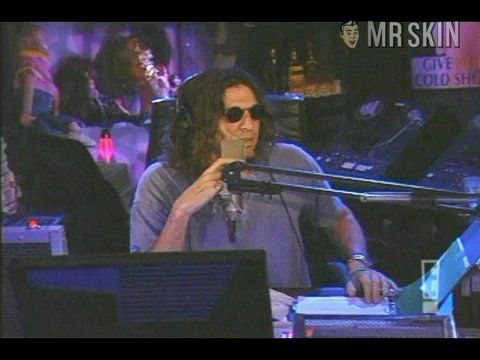 The Howard Stern Show
Sexy, underwear The (Dairy) Queen of All Media pulls open her shirt and flashes her 50,000-watt, chocolate-milksack-stuffed bra. Whoa! I think Little Mr. Skin must have swallowed some of Robin's "Master Cleanser."

Robin Quivers makes breast men quiver. Howard Stern's long-reigning Queen of All Media off-sets her partner's stern remarks with a hearty laugh that comes bellowing from her beautifully behemoth brown bosom. While Robin delivers the news, Stern delivers the nudes, but surprisingly he's never been able to get Robin to pop the tops on her superlative super-soakers. Baltimore native Robin has been working alongside Howard every morning for over two decades, and aside from various Stern-related TV series and video outings--Howard Stern's Butt Bongo Fiesta (1992) comes to mind--she has only appeared as an "actress" in a few productions. Private Parts (1997) marked her most famous foray onto the big screen, and she was playing herself. She also turned up in the made-for-TV Deadly Web (1996) and An Alan Smithee Film: Burn Hollywood Burn (1997). The closest we've come to delighting in Robin's dusky dairy dirigibles was when she flashed her double-parachute-sized boulder-holder once on the show. It was a fleeting moment, but unforgettably, flabbergastingly great! Fly, Robin, fly off that top again soon, and this time burn the bra!

The Howard Stern Radio Show - as Herself

The Howard Stern Show - as Herself