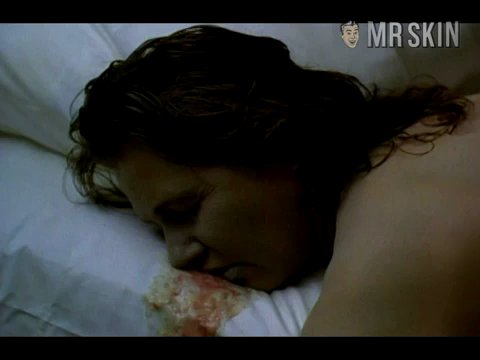 If you’ve got the hots for Roberta Bassin, get in line. The beauty has many admirers but gave her heart to her prom date when she was only nineteen. Yes, Roberta's been out of circulation for a long time, but the brassy brunette has a body of work that she thankfully shares with the rest of us. It all began with Through Naked Eyes (1983), but don't get your hopes up, it's a TV movie and Roberta only has a cameo as a newswoman. She then went on to play a souse in Barfly (1987) but didn't share any skin time with Faye Dunaway. In a change of pace, she played The Witch in the sequel Rock 'n' Roll High School Forever (1990) and appeared on a lot of TV series, such as thirtysomething, Picket Fences, The Pretender, and Crossing Jordan. It was in the made-for-TV film Indictment: The McMartin Trail (1995) that she finally fulfilled her fleshy destiny. And that, sadly, was that, but what a that it was.