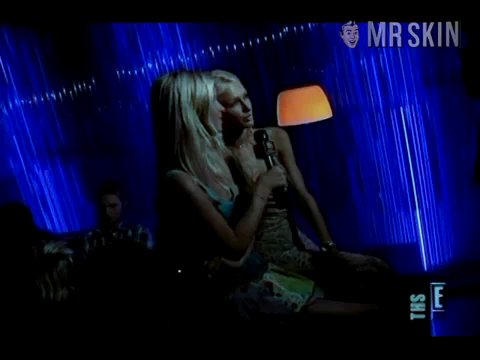 E! True Hollywood Story (2001-2006)
Sexy Sisters Nicky and Paris both don some scorchingly-revealing outfits during a montage of photoshoots. They're rich . . . and raunchy.

Faced with the prospect of being heir to a billion-dollar hotel empire, most people would be content to sit by the pool all day drinking mojitos served by a trained helper monkey. But not Nicky Hilton; she wants people to recognize her face, not just her credit card. Men, however, are usually a little distracted by her fabulous frame, which she often shows off modeling lingerie and skimpy designer creations. Nicky has matured a bit since her early days in the limelight--when she, along with sister Paris Hilton, was one of the elite’s most notorious (and youngest) party girls. Now Nicky spends her time as a fashion and handbag designer. Although it seems that Nicky is content to leave acting to her older sister, Mr. Skin hopes she changes her mind soon, because this hotel heiress has a lobby he wouldn’t mind checking into.