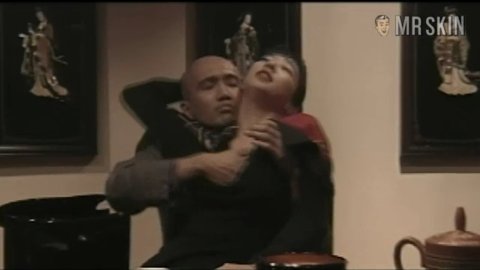 The stereotype of the demure and obedient Japanese woman who bows and defers to the will of the male master may be an appealing notion to men henpecked by the empowered females of Western culture, but don’t expect butt-kicking beauty Nao Eguchi to play into that fantasy. The raven-tressed, petite, almond-eyed pixie appears to be as accommodating as a mouse when she pulls her hair back and uses the traditional schoolgirl bangs to highlight the sensitive fragility of her placidly pretty face. Then she lets her hair down while playing a secret spy assassin in Zero Woman Returns (1999), and all those visions of shy, giggling geishas go out the window. Also out the window are Nao’s clothes. She tosses delicacy to the wind and hops atop a co-star for a bronco-riding, boobie-bobbling boff that is bold and beautiful.