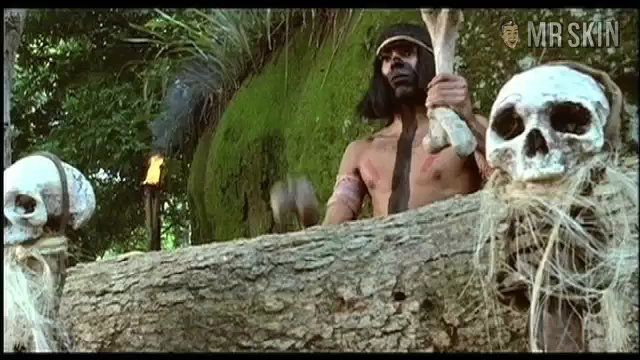 Massacre in Dinosaur Valley (1985)
Nude, breasts, butt, bush 00:47:00 Suzane and Susan gets stripped down by a pack of ravenous natives. Brunette Suz has her delicious, delectable chest-delicacies on display yet again.

The action initiates in Brazilian film Massacre in Dinosaur Valley (1985) when the lead character, Michael, hitches a ride to Brazil to do some dirt digging for dinosaur bones. He wants to go deeper into the Amazon jungle, so he takes a plane out there, but the plane crashes and now he’s stuck with a couple of supermodels and another guy named Soares. On their trek back to society they run into cannibals, vicious animals, quick sand, and slave owners. But enough about all the troubles, let’s focus in on those supermodels! Suzane Carvalho shows quite a bit of her bush, buns, and boobs in a few scenes. She gets stripped down by some topless Amazonians and put in some of their garb, then jiggles her jugs through the escape, and also has a sexy shower scene early on. Susan Hahn also gives us the B trifecta in some of the same scenes, and also gets caught in some lesbo fun. More of a mammacre than a massacre!