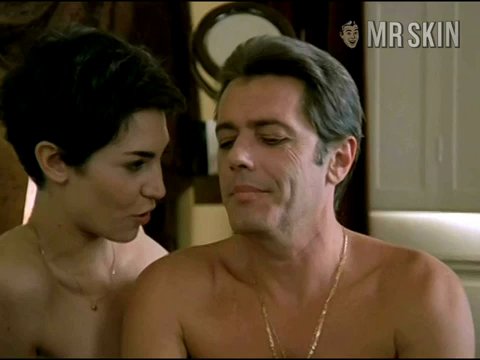 Born in Buenos Aires, Argentina in 1975, Mariana Santangelo got off to a great start in the industry, landing the lead role in her very first film, En la puta vida (2001), or In This Tricky Life. It seemed as though the sky was the limit from there, but she only appeared on screen three more times over the next eight years, carefully selecting her projects. She was in the feature films The Impatient Alchemist (2002) and Miente (2009), as well as an appearance on the tv series What About Brian? Let's hope she gets back on screen, because once you see her sensational topless scene in En la puta vida, you'll be crying out for more! Get a load of Mariana's mams as she lays in bed and arches her back before a guy joins her on the bed and she sits up, giving us an even better look at those lactoids! Mariana Santangelo will have you starting up an Argentine Revolution in your pants!