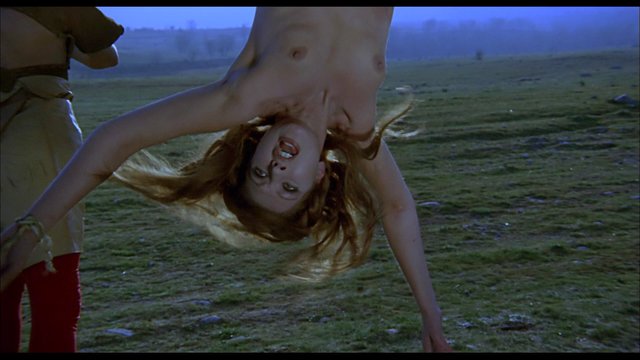 The curse of a decapitated warlock haunts his family centuries later in the ripe Euro horror pastiche Horror Rises from the Tomb (1973). Written by and starring Jacinto Molina (the real name of Spanish horror icon Paul Naschy), the film describes the torture and beheading of a knight and his wife in Medieval France. When the man’s descendants arrive at his mansion hundreds of years later, eager to lay claim to his head, he scorns their claim by subjecting them to an evening of hellish, flesh-tearing surprises. Regularly cited as a landmark in Spanish horror, Carlos Aured’s film is also distinguishable for its sexy cast. María José Cantudo, Emma Cohen, and Helga Liné all interrupt fright night to reveal flashes of their bewitching female flesh.