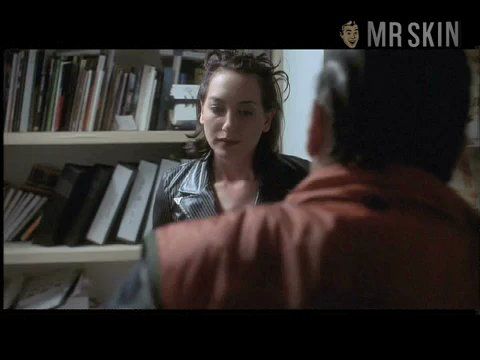 The pen is indeed mightier than the sword--and sometimes the pen does things that makes our swords have a life of their own, if you know what I mean. Enter Hollywood hotlister Heather Juergensen, who broke onto the celebrity scene by writing her titillating take on modern dating, Kissing Jessica Stein (2001). She also took a starring role in the film as Helen, one of two bi-curious women who answer a personal ad to experience the naughty-naughty with another woman--thus paving the way for some steamy, playful and downright realistic onscreen lesbian action. Since the critical and financial success of her onscreen smooching, this raven-haired Brooklyn-bred bombshell has lent her sexy scriblings and boisterous body to several projects--from stage to screen to television, with her latest, The Haunted Mansion (2003), putting her alongside “busting at the seams” bombshell Jennifer Tilly . . . and wouldn’t Kissing Jennifer Tilly make a great sequel to Heather’s bust-out, French kiss first hit?