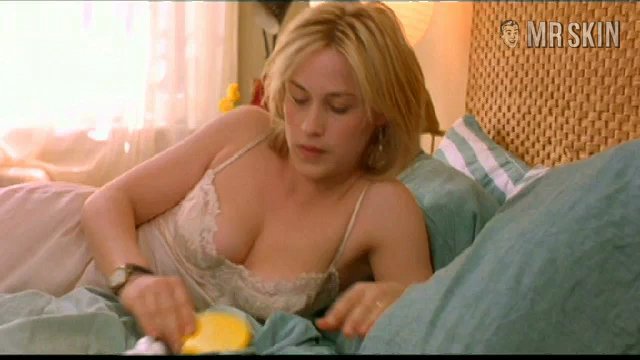 Flirting with Disaster (1996)
Sexy 00:03:00 Patricia Arquette is skintastic in this sexy scene!

Mel and his wife can’t decide on a name for their four month old son in the movie Flirting with Disaster (1996). To solve this problem, Mel goes out on a journey, with wife and son alongside him, to do some self discovery, and this, he says, will give him the perfect name for their son. He wants to find his birth mother, so he enlists the help of an adoption agent who’s also a student psychologist’s aid. She hopes to film the reunion so that she has some raw material to add to her dissertation. As you can imagine, the quest for Mel’s roots has loads of characters and mishaps to entertain for the film’s duration. Also there to keep your eyes glued to the screen is Patricia Arquette’s cleavage, as well as that of Téa Leoni and Mary Tyler Moore, surprisingly. No nudity, but hey, as they title says, we’re just flirting here.