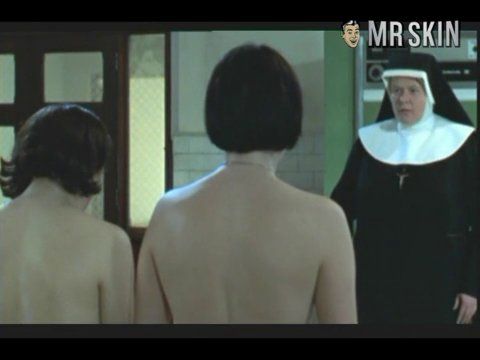 The Magdalene Sisters (2002)
Nude, breasts, bush 00:51:00 Dorothy's the blonde that stands sixth from the left in a seven-nudie line up being judged by Sister Mary Pervert. Awesome! Awesome! Awesome!

Buxom Irish babe Dorothy Duffy was born Dorothy Ni Dhufaigh, but changed her name to the phonetic pronunciation of her Gallic last name when she appeared in the drama The Magdalene Sisters (2002), and has kept that spelling ever since. Her career started in the theatre, where she won several prestigious awards including Best Actress awards from both the Strabane and Enniskillen Drama Festivals. Though most of her larger roles have come on tv series, she has been featured in the Colin Firth and Mena Suvari film Trauma (2004) as well as the film Leila (2011). It was her feature film debut in The Magdalene Sisters that first captured our attention however, and a scene where she appears in a fully nude lineup of the girls as the nuns mock them. Dorothy's the blonde, second from the right in the lineup, showing off plenty of full frontal flappers and fur as she and the other girls are scrutinized. You'll go bananas when you get a load of Duffy's muff-y!

The Magdalene Sisters (2002) - as Rose/Patricia

4 Pics & 1 Clip
Nude, breasts, bush 00:51:00 Dorothy's the blonde that stands sixth from the left in a seven-nudie line up being judged by Sister Mary Pervert. Awesome! Awesome! Awesome!
Live Cams - View all