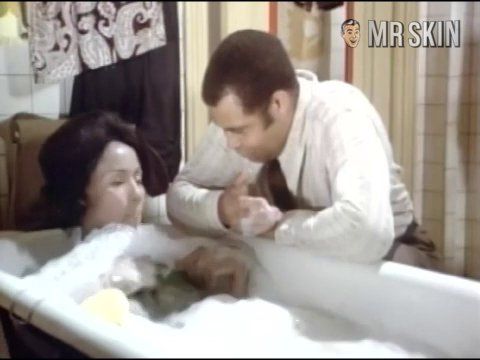 A chocolaty sweet reprieve from the lily-white face of mid-twentieth-century Hollywood, Diahann Carroll crushed color barriers, pioneering a proper path for future blacktresses. Di made her soulful debut in the all-colorful cast of Carmen Jones (1954), working with the delightfully dusky Dorothy Dandridge. Putting her lovely lungs and lively, long legs to good use, Carroll sang and danced in musical greats such as Porgy and Bess (1959) and Paris Blues (1961) alongside African American then-up-and-comer Sidney Poitier, who must have been Diahann to get his hands on her curvaceous caboose throughout both productions. At the end of the swinging '60s, foxy lady Di's deliciousness was so palatable, she was chosen as the first cutie of color to star in her own TV series, Julia, recreating the trials and tribulations of a sultry, single black mother with dignity and a delectable aura of grace. In her one and only peek of skinematic perfection, Diahann debuted a fine flash of coffee-caramel flesh, unwrapping one of her Hershey kissed floaters in a bathtub scene in Claudine (1974). What a bitingly bittersweet performance and career, full of remarkably fresh choices and powerful, color-blinding beauty.

The Court - as Justice DeSett

The Diahann Carroll Show - as Herself

Lou Rawls Parade of Stars - as Herself

The René Simard Show - as NA