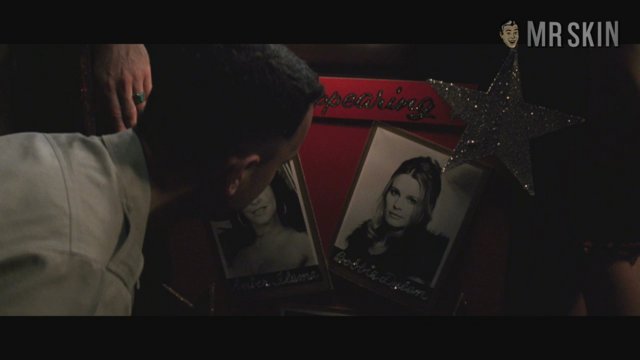 Forrest Gump (1994)
Sexy 00:36:24 Life is like a brief left titty: you never know when you're gonna see one. Dante leans over onstage, and we see a quick left hint from a distance.

Danté hasn’t had much of an acting career, so to speak but she’s quite a hit with The Peanut Gallery here at Skin Central. Of course, it doesn’t hurt at all that both of her performances on the Silver Screen were strippers of some ilk… We certainly know how to appreciate a topless lady! Especially one with gargantuan gazongas like Danté’s! Although she may not be a household name to the vast majority of the American public, you may recognize Danté from her first role as “Topless Girl” in the mega-blockbuster Forrest Gump in 1994. No, it wasn’t the part that won all the Oscars for the flick but we like to think of it as the “glue that held the production together…. or at least it was some kinda of sticky stuff!” Where would the story go without “Topless Girl?” Nowhere, I tell ya! The following year, Danté made her second (and final) Sin-ematic appearance in the ultra-Skinful Showgirls as one of the many strippers who work with the incredibly whack-tastic Elizabeth Berkley. Her breasticles-exposure in this one is much better than the previous turn, so be sure to check it out. Just go ahead and try not to get lost in the plethora of boobs floating around on the screen! There must be, like, 57 tits up there and all at one time… heaven!