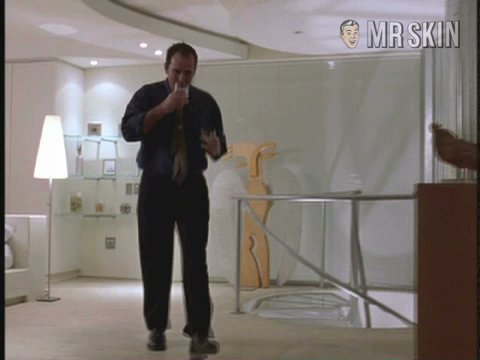 Chantelle got her big Skinematic break back in 1999 when she landed a miniscule role as a “Lady-in-Waiting” in the unfortunate flop Merlin: The Return opposite Patrick Stewert. At least it was a decent resume builder. This comely British tart proceeded to take on another small role in 1999’s Dazzle before finally leading the Hell-Hath-No-Fury-as-These-Vengeful-Broads cast of 2000’s Glory Glory which was originally titled “Hooded Angels” Gee. Wonder why they changed that title! Then, praise be, Chantelle finally showed up on the trusty ol’ Skin-o-Scope here at Skin Central for her part in the B-Grade Peter Weller action flick Styx in 2001. Sure, she only flashed her ass-flesh while showering in a scene for a brief time butt… er… BUT we’re hoping that it’s a step in the right direction. We didn't mind seeing her shower and yes, we’d prefer to see her doing it naked!