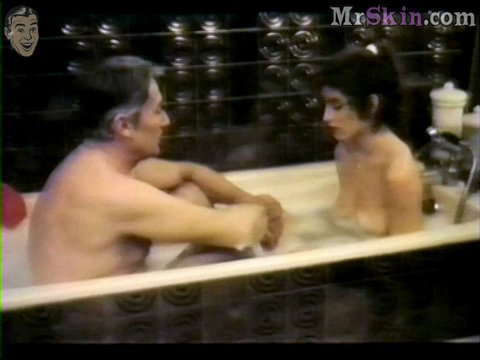 Secrets of the Satin Blues (1981)
Nude, breasts 00:43:00 Her bouys bob at the surface of the bathwater as some old guy squeezes her Charmins.

Caroline burst onto the French Skinematic Scene with quite a flourish in 1981 when she landed the role of “Rose,” Marcha “U.S.” Grant’s maid in the Euro-Sexploitation feature Les Folies d'Élodie. The film is all about a pair of blue panties that Grant purchases at the beginning of the flick. And what nice panties they are! They cause the person wearing them to get all hot-and-bothered, generally leading to some serious sex, including some lady-licking action on the part of both of our heroines. Caroline gets her meat-beaters on the randy ripsy rousers and, understandably, gets naked quite a bit. It’s sexploitation in its finest hour.Sadly, Caroline’s career proved to be quite short lived. After a turn as “Le mannequin” in L’Amour nu later in 1981, she finally landed a leading part in 1984’s Mesrine. However, that proved to be her final flick and she hasn’t shown up on our SkinOscope since. What a drag.

2 Pics & 1 Clip
Nude, breasts 00:43:00 Her bouys bob at the surface of the bathwater as some old guy squeezes her Charmins.
Live Cams - View all