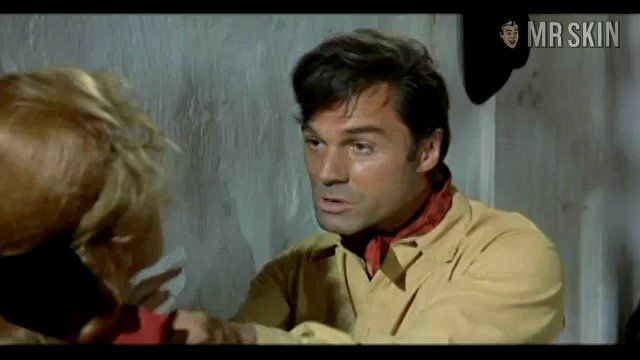 Land Raiders (1969)
Nude, breasts 00:59:00 Her guy rips open her shirt, pushes her down on the bed, and gets rough. Although her bra remains on, Arlene's ample rack bounces out for a quick peek.

Back in the '40s, Arlene Dahl was working as a model for department stores. In its time, that was the equivalent of posing for the Victoria's Secret catalogue, so you know this broad was hot enough to stick pages together. Then she took Hollywood by storm with her debut in My Wild Irish Rose (1947), where she flaunted her fabulous stuff in some lingerie, which was akin to hardcore pornography back in the day. Soon Arlene was on her way to stardom as the era's hottest glamour girl. But this beauty has brains and prepared herself for when the tits would start to sag by launching Arlene Dahl Enterprises marketing lingerie and cosmetics, so that every woman could look as sexy as she does. Arlene loves life and was never content to settle down with just one man. One of her many husbands was Fernando Lamas, with whom she spawned this generation's favorite cocksmith Lorenzo Lamas. Mother and son even appeared together in Night of the Warrior (1991). But for a more revealing peek at mommy dearest, check out Land Raiders (1970). Keep your eyes peeled, because Arlene only peels off her shirt for a very brief nipple exposure. But it's the top of the tits for this act-chest.

6 Pics & 1 Clip
Nude, breasts 00:59:00 Her guy rips open her shirt, pushes her down on the bed, and gets rough. Although her bra remains on, Arlene's ample rack bounces out for a quick peek.

One Life to Live - as Lucinda Schenck