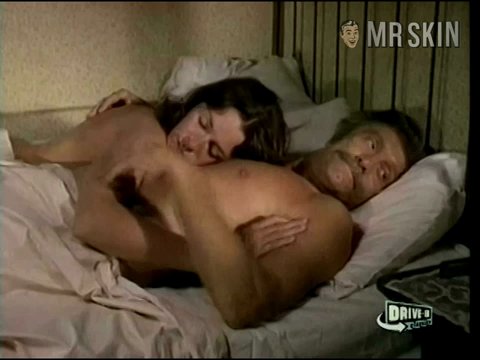 A Gunfight (1971)
Nude, butt 00:07:00 Jane gets in a little canoodling time in bed with Kirk Douglas. She shows her hot cross buns; he, thankfully, does not.

The Western is the great movie art form, but by the ‘70s postmodernists where starting to pick it apart. Case in point: A Gunfight (1971). Kirk Douglas and Johnny Cash are two to the fastest gunslingers around and duel one another in a bullring. If that isn’t symbolic enough for you, the filmmakers emphasize their ambiguity toward the genre by having two endings, one where Douglas lives and another where Cash is victorious. But the only ending that stirs our imagination at Skin Central is the one revealed by Jane Alexander, who flashes her round fanny at the beginning of the flick.