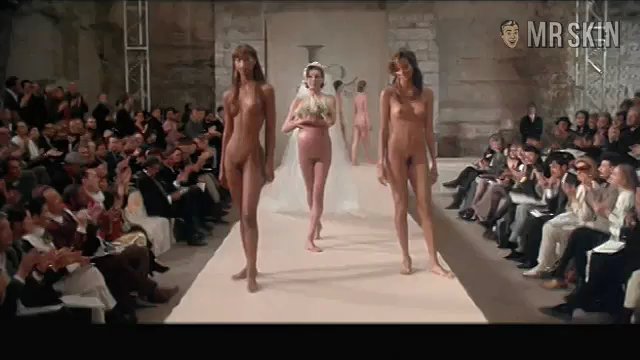 Ready to Wear (1994)
Nude, breasts, butt, bush 02:02:00 Ute displays the thatch as she struts naked down a runway...with flowers covering the boobs and a huge pregnant belly.

Ute Lemper is a Teutonic tootsie, a singer/actress/model from Germany whose sleek blonde good looks would make her a star even if lungs were only good for squeezing. She started her career as a model, but her big break came in 1983 when she played a pussy in the stage hit Cats. Her film debut was in a West German piece, Drei gegen drei (1985). By 1989 she became renowned for her singing ability, having released a concert video, as well as performing on numerous soundtracks and CDs. In the early 1990s Ute moved to the United States, making her most notable screen appearance in the fashion send-up Ready to Wear (1994), in which she appeared very pregnant and very naked alongside a slew of other nude-worthy models. She has since moved back to Germany but has returned Stateside to vamp as the sexy Velma in Chicago on Broadway. You've got to love the singer not the song.

7 Pics & 1 Clip
Nude, breasts, butt, bush 02:02:00 Ute displays the thatch as she struts naked down a runway...with flowers covering the boobs and a huge pregnant belly.