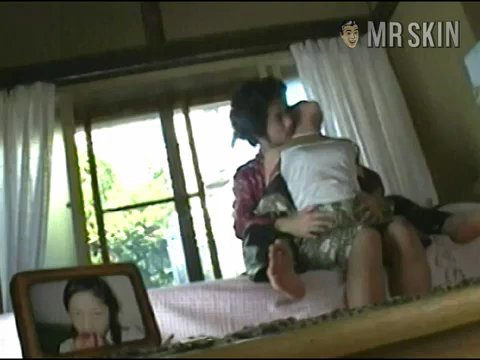 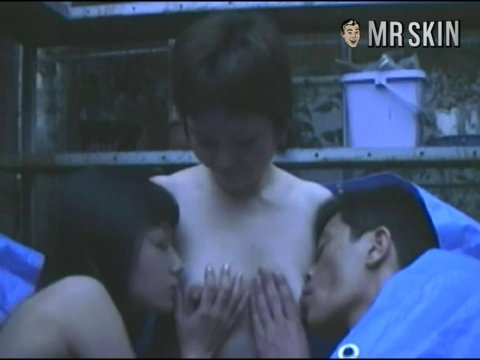 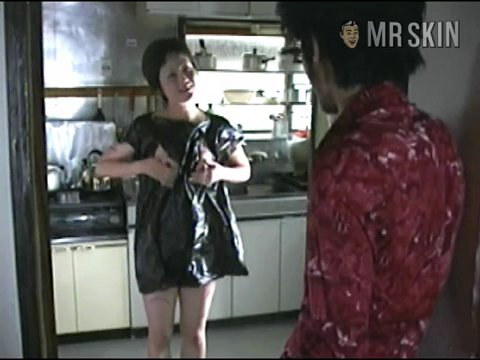 Shungiku Uchida started her career in 1994 with a small supporting role in Muma but unfortunately, it didn’t turn up much. Thus, she took to writing her own flicks, starting with 1996’s Me wo tojite daite. Sadly, Shungiku was passed over for a part in the flick, which is a considerable drag, considering that it’s one seriously erotic picture with scads of gratuitous nudity. Not to worry, though…After a bit part in the made-for-Japanese-TV flick Skip in 1996, as well as an ultra-brief gig as “Prostitute” in Tokiwa-so no seishun that same year, Shungiku put her acting career on hold…but only for a little bit. She returned to Scintilate Silver Screen in 2001’s Visitor Q. Shungiku had quite a few surprises and tricks up her sleeve, as well as hidden in her bra… In perhaps the most disturbing Skin Scenes ever to hit these hallowed halls of Skin Centraldom, Shungiku’s eye-popping pillows make their first ever appearance on celluloid, only to become human milk squirt guns when Jun Mutô makes it a point to squeeze and squirt the milk right out of them, quite literally. Imagine, nipples the diameter of the average thumb, being squeezed so hard that milk is streaming through the air from both barrels! Of course, be sure to check it out. It is a bit on the bizarre side, though. You’ve been warned. Drinks are on the house too in another scene when she feeds both a guy and gal. I wonder if the crew got some too? Care for a little something to wash down that Japanese food? Don’t miss this!

10 Pics & 3 Clips
Nude, breasts 01:00:00 Shungiku tears some holes in the trashbag she's wearing so she can squeeze the milk out her own tits. Weird.
Nude, breasts 00:48:00 Jun Mutô squeezes Shungiku's udders until they lactate, sending mother's milk flying all over the place.
Nude, breasts 01:20:00 Shung's son is suckling her left breast. Then Fujiko joins him &amp; sucks on the other one. Only in Japan!
Live Cams - View all