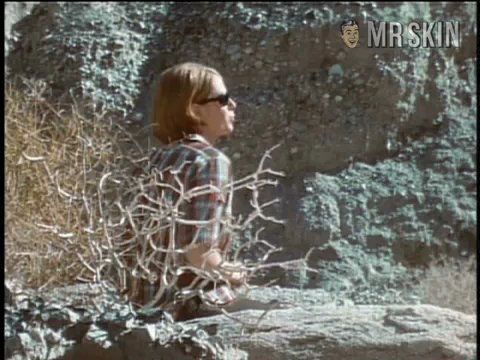 Randee Lynne Jensen was one of the busiest actresses of the ’70s. Her parts just usually didn’t rate a screen credit. You can find Randee sexing up minuscule roles in major trash such as Run, Angel, Run (1969), Evel Knievel (1971), Murph the Surf (1975) and Aloha, Bobby and Rose (1975). She even shows up among the happy beachgoers backing Suzanne Somers in the TV movie Zuma Beach (1978). During this time, Randee was also busy working behind the scenes as a production gal for all kinds of films. The luscious redhead even landed a role in a true schlock classic. Satan’s Sadists (1969) is memorable for a lot of insane moments, including the timeless beauty of topless Randee on the rocks in an incredible bad-girl biker pose. Instead of adding to her anonymity, Randee’s sunglasses actually ensure that this is one topless scene that will never be forgotten. And nobody worked harder for the immortality.