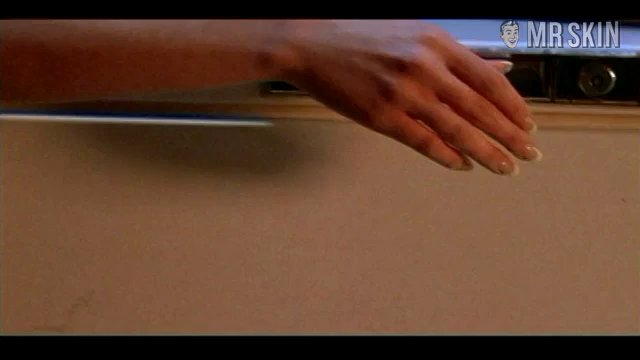 Poison (2000)
Nude, breasts 01:09:00 Melissa bares her breasts during some bangtabulous sex with Larry Poindexter atop a large appliance of some sort.

missionary walked in on sex interrupted on table

Melissa Stone is one seriously hot babe. Although she’s yet to appear in anything of “serious” note, outside of her role as “Patty the Prom Girl” in 2002’s Girl Fever, the semi-follow-up to 100 Girls, Melissa has shown that she’s more than capable of careening through a role, as well as causing some serious pant-tenting…To see what we mean, check out her more-than-impressive Silver Screen debut in 2000’s Poison. (It can also be found under the title Thy Neighbor’s Wife, so be on the lookout, fellers…) Although Kari Wuhrer is definitely the star of the show, Melissa damn near steals the limelight as the daughter of one of Wuhrer’s intended victims. Like so many Soft Core thrillers, the movie is rife with simulated sex scenes and Melissa, like the entirety of the cast, gets her time in the warm glow of the Skinematic spotlight. Although she stops just short of a full-frontal credit, there’s more than enough bouncing boobs (and what an incredible set, at that!) and heart-shaped ass to get your pulse racing, so be sure to check it out.

8 Pics & 1 Clip
Nude, breasts 01:09:00 Melissa bares her breasts during some bangtabulous sex with Larry Poindexter atop a large appliance of some sort.
Live Cams - View all