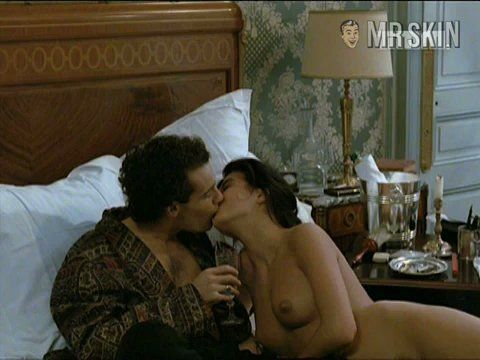 Austria is the home of Wolfgang Mozart, a great composer and a notorious horndog, at least if we’re to believe Hollywood. And if that’s true, well, then Austrian arouser Marie Colbin is something of a historical figure, as her figure, or her ancestors’ figures, were likely to have inspired Mozart to make beautiful music in his pants. So with that in mind, let’s look at Marie’s first nude scene in the explicit Sei zärtlich, Pinguin (1982), where she got full frontal with a fully erect penis. When those two meet you know there’s going to be trouble, glorious trouble. Marie is the kind of actress who loves to show it all, and she did again in the TV mini-series Bekenntnisse des Hochstaplers Felix Krull (1982) and the movie Der Fall Bachmeier – Keine Zeit für Tränen (1984). Then, shortly afterward, she disappeared. Let’s hope she turns up full frontal again in some lucky guy’s bed. We’ve seen what she can do there.

1 Pic & 1 Clip
Nude, breasts, bush Marie shows full frontal while in the bedroom with her guy.
Live Cams - View all