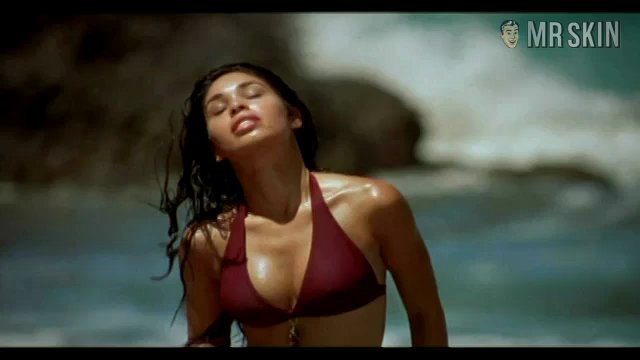 Death to the Supermodels (2005)
Sexy, bikini Maria Arcé is skintastic in this sexy scene!

Kentucky can be proud of something other than bourbon, as Latina lovely Maria Arcé was born in those blue hills. Blue balls may be a more appropriate description for the region, thanks to Maria’s skinginess. The spicy girl has taken many sexy photographs and has appeared in many sexy movies but has yet to cross from sexy to skin. She began her career with a series of cameos, from Mortal Kombat: Conquest on TV to Next Friday (2000), Screwed (2000), and Dr. Dolittle 2 (2001), where she played the voice of a fish. She also showed up in season four of MTV's Undressed, a title that is woefully misleading, and in the porn comedy The Girl Next Door (2004), as well as in the DVD extras for Wedding Crashers (2005). But her breast appearance is her last to date, in the Jaime Pressly-produced comedy Death to the Supermodels (2005), where she barely fits into an itsy bitsy bikini. Let's hope that's a sign of a new, less skingy Maria on the horizon.