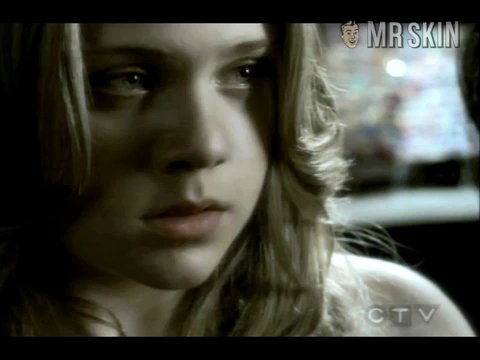 Degrassi (2001-2005)
Sexy, lesbian Ep. 05x11 Lauren (on the left) gets Sappically smooched by the equally foxy Deanna Casaluce. Nice, but how about a nice flash of De-ASS-i next time?

Toronto knows how to make 'em hot. Look no further than Lauren Collins for proof of that. The blonde beauty with a bad attitude and a badass body to match plays edgy characters, but offscreen she's known to be a sweetheart. We love a woman with a good side and a naughty one as well! She's starred in Girls v. Boys, I Was a Sixth Grade Alien, The Best Years, Rita Rocks, Life with Derek, The Strain and as Megan Linderman in Impulse (2018). She is best known for playing Paige on Degrassi in which she had a lesbian relationship and spent a lot of time onscreen kissing her girlfriend. She keeps acting, but we're still begging for a return to her teenage lesbo roots. Lez do it again, Lauren!

The Best Years - as Alicia o'sullivan

I Was a Sixth Grade Alien - as Lindy May

In a Heartbeat - as Brooke Lanier

Life with Derek - as Kendra