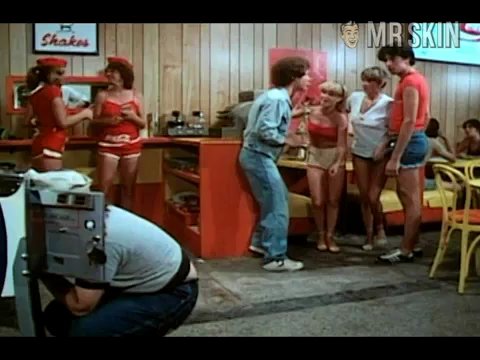 Pinball Summer (1980)
Nude, breasts 00:25:00 To distract a dude, Karen flips up her top and flashes her funbagulous floppers.

Karen Stephen is an act-chest who drives us Hog WIld (1980), which interestingly is also the title of her first credit on screen. The comedy about a boy home from military school who gets the girl and his father’s respect when he takes on a biker gang is a good start, but a strong second is Pinball Summer (1980), also known as Pick-up Summer. It’s about, well, sex, and it features tits in all our favorite places: naked, of course, but also behind the barely there wet T-shirt and in a tiny bikini top. After she appeared in Happy Birthday to Me (1981), Karen’s career was over, but at least we got to open her presents.

8 Pics & 1 Clip
Nude, breasts 00:25:00 To distract a dude, Karen flips up her top and flashes her funbagulous floppers.
Live Cams - View all