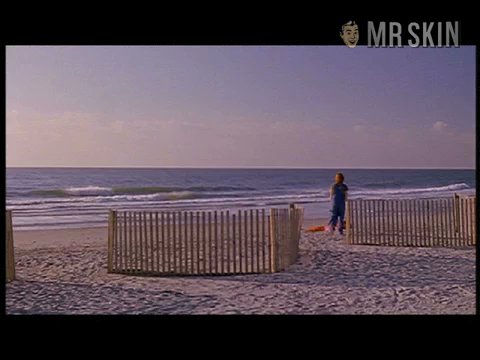 From Shakespeare in the Park to some of the biggest shows on Broadway, Boston native Jennifer Dundas Lowe has had a long and distinguished career in the theater. When she is not on stage she has lent her talents to various movies and TV shows including the award winning Nurse Jackie, Desperate Housewives, and The First Wives Club (1996). Jennifer brought her ample assets to the drama Swimming (2009) where she played Nicola, a girl who struggles to retain a relationship with her best friend when new people enter their lives. In one particular scene the struggle moves to her lovely chest as her top struggles to hold in her sweet rack while she sunbathes in a sexy little bikini. You might crash your meat car and explode all over yourself as your eyes navigate her very dangerous curves. A little later in the film we get more cleavage as Ms. Lowe goes for a row on a lucky guy’s love boat. As he gets on top of her and thrusts away we see her lacy bra and lovely bouncies. Land ho! There are breasteses on yonder beach!