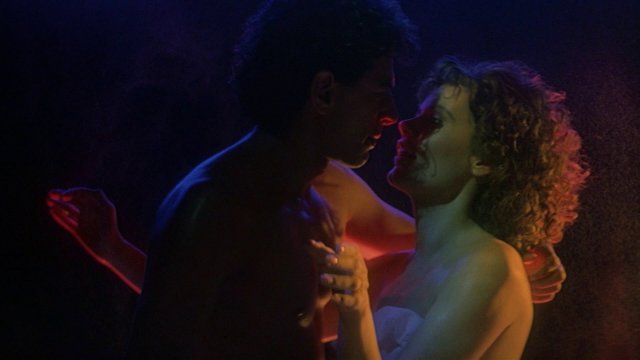 Earth Girls Are Easy (1988)
Nude, breasts 01:02:58 Geena shows off her left jujube while having some outerspace sex with The Fly!

Aliens Mac (Jeff Goldblum), Wiploc (Jim Carrey), and Zeebo (Damon Wayans) are in for a most sexcellent adventure when they crash land in earthling eyeful Valerie’s (Geena Davis) pool in Earth Girls Are Easy (1989). A mild-mannered manicurist with a dull life and philandering fiancé, Val is all too happy to break out her inner vixen for the visitors, highlighting her extraterrestrial chestuals and flirting in short skirts. After giving the horny foreigners a much-needed makeover, Valerie helps them blend in and find skin and dates in the States. In the process of primping, preening, and pimping them out to girls like the crazy-canned Candy (Julie Brown), Val feels like a new gal herself and falls in lust with main man Mac. Will this luscious lass succeed in filling her deep space with his nine? With earth girls as easy and sleazy as Geena on the scene, the answer is a life-a-firming yes!