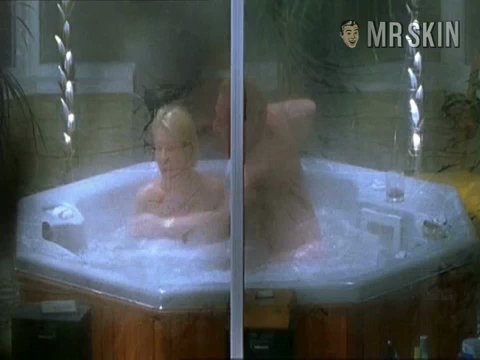 Comely British tart Denise Van Outen started her career in 1990 on the short-lived sci-fi series Kappatoo, which we were quite dismayed to find out had nothing to do with a randy sorority house. Since then Denise has spent the better part of her time with television hosting gigs on series such as The Big Breakfast and Something for the Weekend--indeed. She's recently taken on more theatrical endeavors. It seems she has a thing for the stage, though not the one with a greased pole, sadly. What a drag, considering that she's proven herself to be quite a come-on, most notably in Love, Honour and Obey (2000), in which she showed off her fellatio skills, albeit on a cucumber. (Oh, to be a vegetable. . . ) That's hot, but for an even hotter performance, check out the 2001 series Murder in Mind. On one memorable episode, Denise shared a bubble bath with some lucky British bloke. Thankfully, he wasn't the only person to get a good look at her funbags. Here's hoping for a re-teat performance!

The Big Breakfast - as Presenter

Something for the Weekend - as Herself