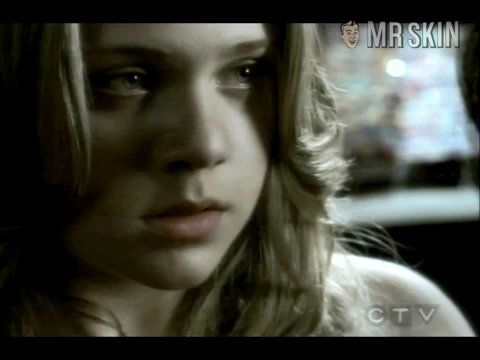 Degrassi (2001-2005)
Sexy, lesbian Ep. 05x11 Brunette vixen Deanna (on the right) lays a big wet one on the equally foxy Lauren Collins. Nice, but how about a nice flash of De-ASS-i next time?

If you’re of a certain age you probably were obsessed with a Canadian soap opera about high school called Degrassi. Well, what’s old is new again with the launch of Degrassi: The Next Generation on CTV. The show brings viewers back to the halls of that horrible time in a child’s development called puberty. It’s a time when hormones are raging, skirts are short, and sweaters tight. It’s amazing any of us managed to get through that time and survive. Dark-haired newbie Deanna Casaluce is a first-time actress on the series playing Alex Nuñez, a bad girl who has the hots for another girl played by the blonde Lauren Collins. Mr. Skin’s high school was nothing like this!

I Was a Sixth Grade Alien - as NA