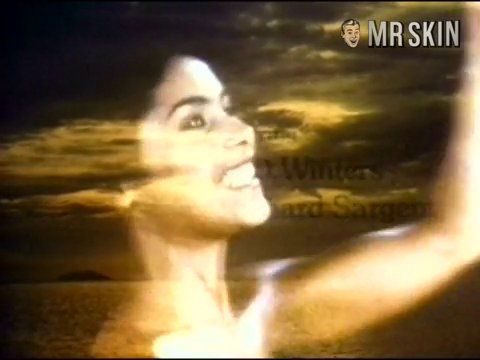 Tanya's Island (1980)
Nude, breasts, butt, bush 00:07:00 Larger-than-life loblollies, lap-rug, and latter end abound as Vanity floats over the sea during the opening credits. And we're off to a fine start . . .

Tanya's Island (1980) is located on that plane of whimsy called the extended dream sequence. It's a good place to be, as often its inhabitants will parade around in their birthday suits. Vanity is not vain about her body and, better still, is willing to share her exotic charms aplenty. To escape an abusive boyfriend she delves into a fantasy that finds her on a deserted island . . . well, not so deserted. Her boyfriend is there, as is an antagonistic ape. Vanity then proceeds to get naked and bang her beau while the gorilla gets jealous. Can you blame him? The battle between man and simian rages for the prize of Vanity's treasured chest (and award-winning ass and laurel-like muff). No man is an island, true; but if Vanity is stranded there, no man wants to get off . . . that's because she's already gotten him off.