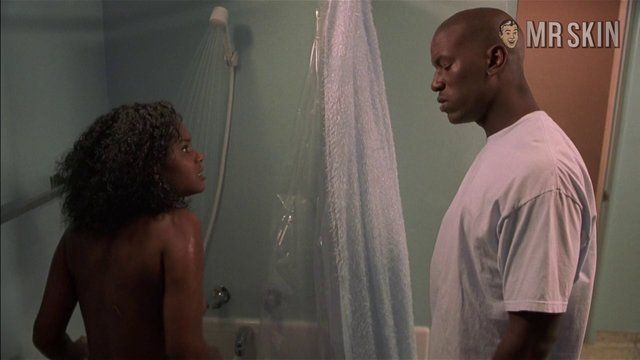 Tamara LaSeon Bass slid into the world of professional acting on the one-time hit series Sliders. That was just the start, of course, and soon this dark ebony princess found herself on the big screen in Bellyfruit (1999). While she didn't show any of her bellyfruit or any other sweet, juicy things, her career was off and running. Audiences got another taste of her ripe freshness opposite Judge Reinhold in Redemption High (1999), but Tamara remained glued to the boob tube and its boobless entertainment. She jumped around in guest spots on Moesha and The Fugitive, and it appeared that viewers' chances of catching the bouncing bounty of blackness that Tamara kept hidden behind her shirt was null and void. Well, don't worry, people, you can void your balls watching Tamara in John Singleton's Baby Boy (2001), where we get a nice shot of her sacks wet from the shower. Most recently, Tamara has been a regular on the Fox drama Boston Public, but she's yet to show her pubic. She needs to get back to sex school!

4 Pics & 1 Clip
Nude, breasts 00:04:00 Nicely-lit shot of Tamara's titties when Tyrese surprises her in the shower.