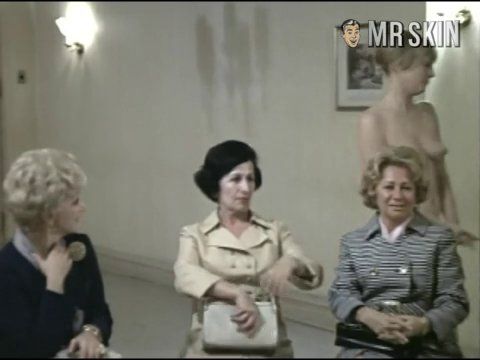 The question is, was Joan Bell an actress, a model or a performer in her first and only appearance on the big screen? The film was the Allen Funt production What Do You Say to a Naked Lady? in 1970. As the title suggests, there is a bit of nudity in the flick. (Understatement of the year…) It basically boils down to a nude version of Funt’s Candid Camera series, except all the scenarios that are presented involve basic reactions to public nudity. Take Joan’s scenes, for instance; she presents a lecture to several different classes, all the while in the altogether. The comedy comes in when the classes lose their collective crap and start giggling like teenagers on a date. It’s pretty interesting stuff, so be sure to check it out. It takes a lot of balls to walk out into a room of unsuspecting strangers while in the nude… or in Joan’s case, it takes a nice rack, a pretty face, nice legs, a fuzzy wuzy, a ton of stage presence and real brains to be able to pull that off! We know what we would say to a Naked Lady. We’ve been practicing that for years but just haven’t had the chance to say it yet!