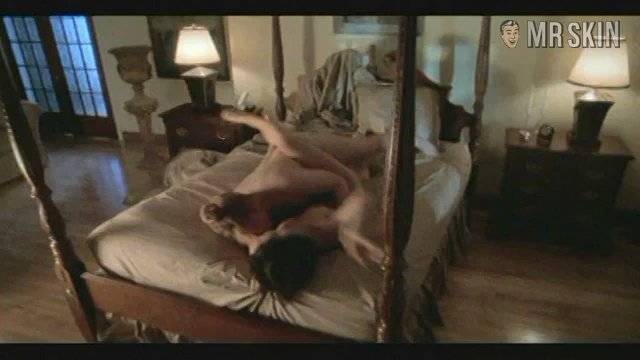 Xchange (2000)
Nude, breasts 01:13:15 Kidder's sweaty kibbles strain over her mate as she plays the dominate role during some rough-and-tumble bonking.

Janet Kidder is tough and gorgeous and she looks like she means business. In other words, she'd easily match her aunt Margot as a perfect big-screen Lois Lane. Instead, the Canadian actress has been busy in TV series and the usual shot-in-Canada syndicated series. The only highlight has been a 1997 episode of Nikita, in which Janet joined with her aunt to play the same character in different time periods. Janet finally landed a splashy American role as a horny bisexual honeymooner in Bride of Chucky (1998). And she became a true skinterfold in the sci-fi flick X Change (2000), in which Janet mounted a guy for a wild ride that sent her taut tits swinging. Her role as a kinky twin in Darkness Falling (2002) should've made her a star, but at least the werewolf film Ginger Snaps 2 (2003) got her back on the horror-sequel scene.

9 Pics & 1 Clip
Nude, breasts 01:13:15 Kidder's sweaty kibbles strain over her mate as she plays the dominate role during some rough-and-tumble bonking.

Made In Canada - as Lisa Sutton