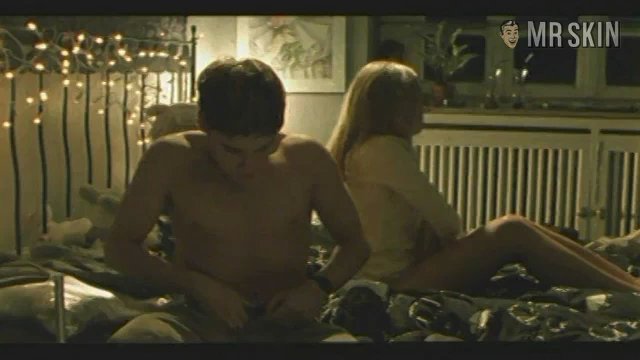 Nichts bereuen (2001)
Nude, breasts 00:37:00 Extensive opportunity to adore Insa's bite-size booblets as she undresses and earns a rug-munch from her boyfriend.

Insa Magdalena Steinhaus, who originally hails from Switzerland, started her career on German TV in the soap Verbotene Liebe. However, it turned out to be only a pit stop on her way to stardom since she was subsequently replaced by Kerstin Landsmann, an equally hot young stunner with an equally hot killer-bod. More recently the green-eyed blonde appeared in several theater plays (e.g., Oliver Twist) as well as in TV series like Jede Menge Leben, SK Kölsch and Die Wache. Insa’s biggest success to date was a small part in the highly acclaimed comedy-drama Nichts bereuen opposite newcomer Jessica Schwarz and one of our personal favorites Marie-Lou Sellem. Nichts bereuen not only marked the Swiss’ small break but also the first time she undressed in front of Mr. Camera and that already makes it a little skin-classic. The scene in question occurs at about 37 minutes into the film when a buck-naked Insa receives some serious oral treatment from her male co-star Daniel Brühl. In the process we get to see her über-cute mini-hooters and of course their heavily swollen nipples – what a sight! That’s the kind of Verbotene Liebe we at Skin Central Germany highly appreciate!

8 Pics & 1 Clip
Nude, breasts 00:37:00 Extensive opportunity to adore Insa's bite-size booblets as she undresses and earns a rug-munch from her boyfriend.