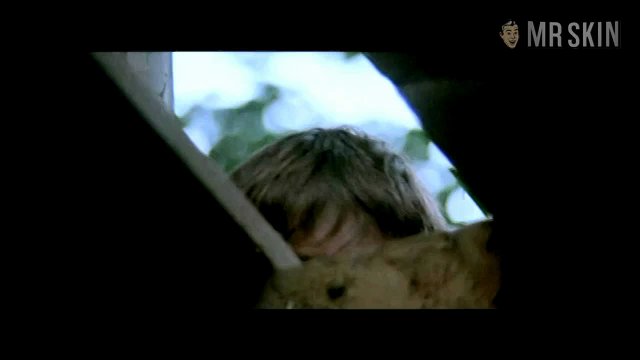 L' affût (1992)
Nude, breasts, bush 00:49:00 A couple of underaged poindexters spy as Evelyne poses, fully frontal, with a bow an arrow for an arteest.

Here’s a combination sure to drive any skin fan out of their mound: redheaded French girl. Ah, yes, that’s it. Say it loud and there are people singing. Say it softly and it’s almost like praying: redheaded French girl. That’s exactly why Evelyne Buyle is so hot. The fiery female from France has been scorching up the screen since landing a guest spot on Au théâtre ce soir in the early ‘70s. But it’s on the big screen that her hidden talents were first revealed. In the comedy Comment réussir…quand on est con et pleurnichard (1974), which means How to Make Good When One Is a Jerk and a Crybaby (1974), she made her nude debut. Oddly it took almost two decades from Evelyne to come out from her skingy grave, but she did it with panache in L’Affût (1992). In it, Evelyne is peeped by a couple of kids as she poses nude for a full-frontal surprise. Let’s hope we don’t have to wait another twenty years for a flash of her cans.

3 Pics & 1 Clip
Nude, breasts, bush 00:49:00 A couple of underaged poindexters spy as Evelyne poses, fully frontal, with a bow an arrow for an arteest.