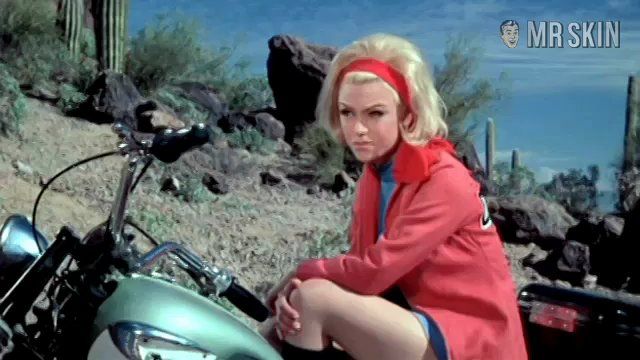 The Mini-Skirt Mob (1968)
Sexy, bikini 00:44:00 A roving cowboy happens upon Hedstrom and her groovy go-go gal pals sunbathing. When he tries to make off with her bikini top, she flashes a bit of her left Barbro.

Barbro Hedström makes us all a bit more intelligent. When she made her debut on the sitcom Get Smart we found her sexy, too, which made us feel good. She can make us laugh, as she did in a sketch for The Carol Burnett Show, scare us in the movie Chamber of Horrors (1966) and arouse us in The Mini-Skirt Mob (1968). Ironically, in that latter feature, she is mostly seen in her underwear, which could be called a micro-mini, but we just call it hot. Elvis Presley must have thought so, too, as she appeared in his musical Speedway (1968). By the end of that lustful decade she was sadly at the end of her career, featured in Sadistic Hallucinations (1969), but it was no hallucination how much she turned us on in those few years.