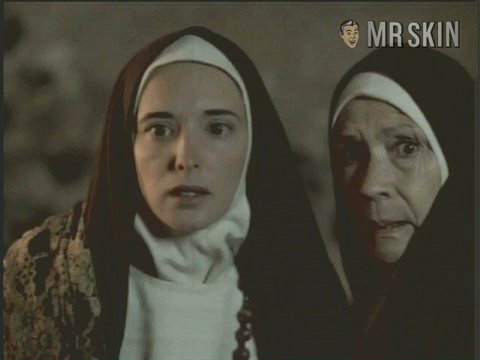 Tere López-Tarín is Maria Ines, a novice in the mission business and the daughter of a Spanish bigshot in Ave María (1999), Eduardo Rossoff's directorial debut. Tere is a brilliant student of all manner of smartypants stuff, but this bright light doesn't seem quite right to Father Alfredo Sevilla and his seventeenth-century ways. A brainiac broad? No way, José'! Don't you know these are the olden days? Tere's papa goes and offs himself, leaving her grieving greatly (and grunting most heavily, because without old dad around she's been demoted from intellectual work to physical labor). It's not long before Tere's brain goes on a holiday and she starts hearing voices. Ditching her inheritance, Tere heads off into the world to minister to the poor and heal all the weaklings with her otherworldly connection to God. This doesn't sit well with Father Damian Alcazar, the devious old dastard who's killed off his rival and taken control of the mission. Now he's made it his mission to stop Tere.